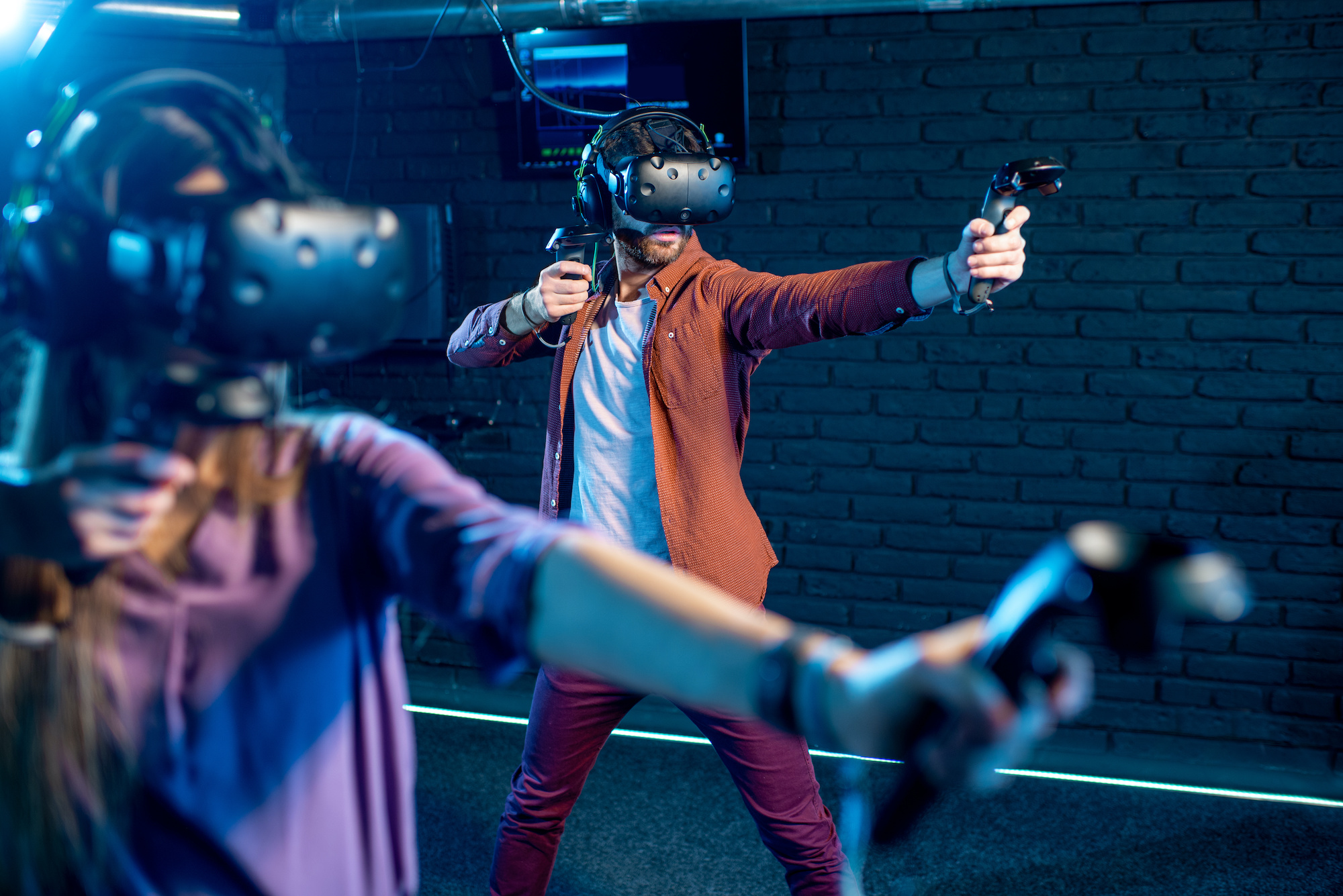 From the consumer sector to the big luxury brands, examples of advergaming are multiplying. Our experts have therefore studied this phenomenon and provide you with their thoughts in a white paper available for free download.

What interest do brands have in appropriating the codes of a universe that is unfamiliar to them? How does our brain react while playing? How do these neural phenomena serve the cause of brands? How to integrate your brand into the world of video games, without betraying its DNA ? How to design an experience with high added value for these young consumers?… Below is an excerpt from our reflection. 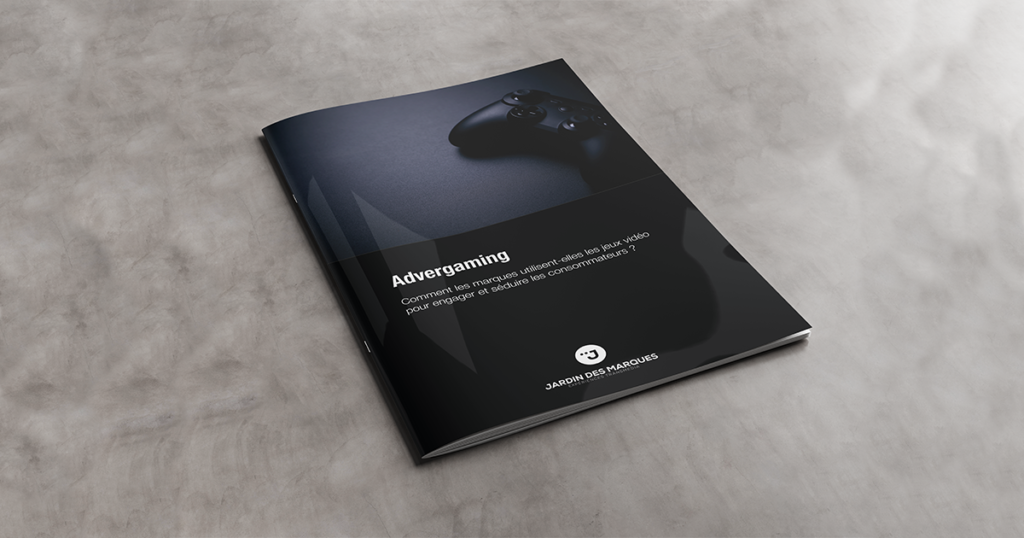 Video games: a practice that has become mainstream

With the diversification of video game media as well as the variety of offers offered, “gaming” has become a daily activity and now affects very diverse categories of people (gender, age, income, etc.). Like the media, music, reading or video, video games are played regularly: thus more than 1 in 3 internet users play video games every day. Half (51%) play it at least once a week. The proportion is higher among children and adolescents aged 10 to 17: more than half
(56%) plays it daily and 84% every week.

According to Médiamétrie, this frequency is particularly linked to the variety of game media. The smartphone is in the lead for more than half of the players (59%). For Thibault Evide, Head of studies and clientele at Médiamétrie, “smartphones correspond to more mainstream gaming; it is used by a large public to occupy certain moments of waiting, in public transport for example”. The computer comes in second place with 55% of players. Nearly half of gamers (47%) practice this activity on the TV game console and more and more often on the network. Players like to vary their game media and use an average of 2.3. Nearly 2 out of 3 players (64%) use more than 2 media to play video games. Mobile games and casual games are popular with gamers (42%). 3 out of 10 prefer role-playing and adventure or platform games.

Advertising is an integral part of playing Nearly 3/4 of gamers (73%) have seen advertising while playing a video game in the last 6 months. This is present regardless of the medium, with a predominance of the smartphone. Advertising on the game’s home screen is the first type of advertising seen. Advertising is rather well accepted in this universe since 6 out of 10 players agree to be exposed to it if it allows them to benefit from an additional service in the game (additional time, additional life, customization/personalization of avatar, etc).

A growing public has in recent years adopted video games as a hobby. The figures speak for themselves: in 2018, nearly 3/4 of Internet users aged 10 and over were “gamers”, i.e. 32.3 million people . All children and adolescents aged 10-17 are video game players, i.e. 3 million (they constitute 9% of the player population). Among adults aged 18 and over, 72% are gamers – that’s 29.3 million (91% of the gamer population). A phenomenon further amplified by the practice of eSport: for Thibault Evide, “esport is growing and energizing the practice of video games in France” .

Compared to all Internet users aged 10 and over, on average, video game players reveal a slightly more masculine profile, aged under 50, CSP+ or student. For Thibault Evide, “in 2019, video games now concern all layers of the population: there are very diverse types of players, whether in terms of profiles but also frequency, category of game, etc.” . He adds “with the arrival of consoles with hyper-intuitive interfaces and the development of casual games on smartphones, video games have spread to a more family-oriented and more feminine audience. »

Thus, the game is a hobby like the others, and takes its place alongside them. If we look at all the cultural practices of gamers, they are very similar to those of all Internet users, even higher in terms of attendance at cinemas, concerts, exhibitions or sporting events. And more than half of video game players engage in regular physical activity or sport.

An original and effective way to reach millennials

As we have just seen, video games no longer only concern hardcore gamers and allow brands to reach a relatively large audience. But for some of them, the advergame is also a way to rejuvenate their audience by addressing, with more current codes, millennials.

The Burberry brand, famous worldwide for its scarf and its famous Tench coat, experienced a period of decline until the end of the 1990s. The lack of innovation despite the licenses of all kinds had made Burberry lose its luster. The appropriation of the Nova check printed cap by the rappers had then contributed to the loss of popularity of the brand with prestigious customers. To remedy the fall in its reputation, Burberry will withdraw the famous cap from sale and manage to rejuvenate its collections by adapting its creations according to the target clientele. This rejuvenation work found new expression in 2019 with the launch of an online game called “B Bounce” and available worldwide on Burberry.com, as well as on the giant screen of Burberry’s flagship store, located on Regent Street, London. “B Bounce” was launched alongside the new Burberry jacket collection. “B Bounce” is a platformer centered around a cute little deer-looking character wearing a monogrammed vest, who players must jump from platform to platform until they reach the moon. Players gain speed by collecting Burberry logos and drones. Mark Morris, senior vice president of digital commerce at Burberry, said in a statement at the time: ” We have experienced the game in China, but “B Bounce” is our first playful extension in this format to entertain and connect our new younger consumers around the world. We know they live in an environment increasingly gamified, both online and offline line, and we are delighted to be able to integrate them to the Burberry community – and have them explore our new collection of down jackets – from this manner. » 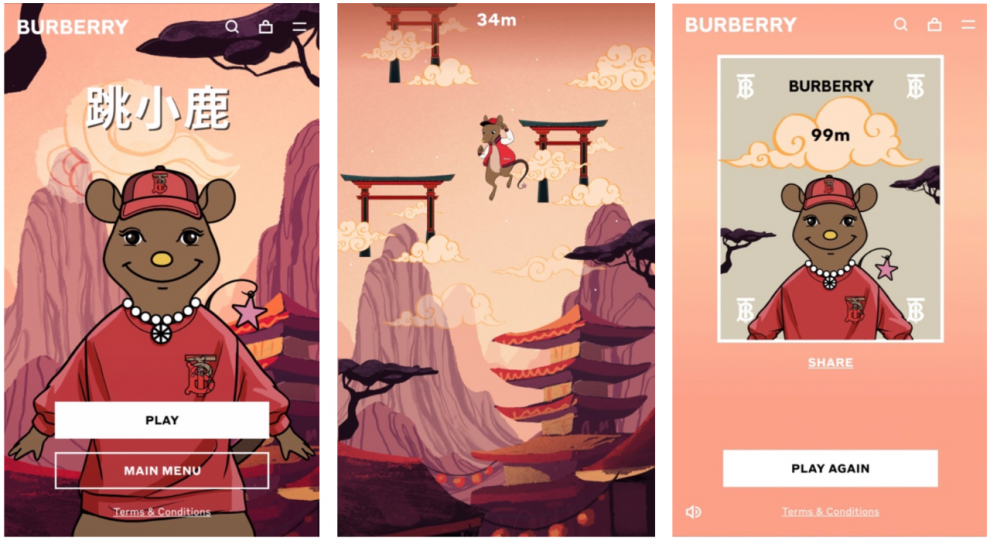 Recognized efficiency at a reasonable cost

The advergame is an interactive and particularly immersive communication medium . By providing the consumer with a playful experience, the brand becomes an accomplice in the pleasure provided to the player. Unlike conventional advertising, which is generally imposed on the consumer, this gaming experience is chosen and therefore falls into the category of Brand Content , designating all the editorial content offered by a brand to its audience. The consumer-actor is therefore more receptive to the brand’s message and can even become its promoter thanks to the viralization strategy that generally accompanies advergames. These games aim to create an association between the brand and an experience in order to leave a lasting positive image in the mind of the public. This interaction with an advertising format alone leads to a 28% increase in brand awareness according to the study The Power of Touch in Media, which dates from 2014.

In a study conducted by Gameloft Advertising Solutions on one of its branded mini-game campaigns, 66% of respondents said that interactive advertising increased their interest in the advertised product or service. Users who enjoyed playing this mini-game are then more likely to remember the brand in the future, as this whole process is consented and organic. The way a brand’s message sticks in the minds of users with a positive memory shows the inherent gain in brand awareness that this format brings. The idea of playable ads was tested by Gameloft Advertising Solutions by measuring the advertising impact of this format. For this study, a very popular candy brand in the United States launched a multi-format campaign with the video game studio to increase its social media engagement, brand awareness and contact database. Gameloft Advertising Solutions then collaborated with Nielsen to conduct a campaign post-test by measuring brand awareness on a panel of users exposed and not exposed to the mobile campaign. The overall post-test of this campaign achieved a result of +44.5% brand lift (= the awareness gain brought by the campaign), but the most interesting thing is how the format of the mini-game clearly outperformed all other formats, in particular the score of video formats with a brand lift reaching +53.4%.

An addictive communication medium thanks to dopamine

Dopamine (DA) is a neurotransmitter, a biochemical molecule that enables communication within the nervous system, and one of those that directly influences behavior. Dopamine is released by our brain during experiences that it associates with pleasure , and especially when taking drugs. This is why it is nicknamed the “happiness hormone”. Dopamine is the hormone of immediate pleasure , during an action that causes satisfaction such as the taste of sweet food, a cigarette, sexual pleasure… Or playing a video game. Thus, when we complete a level or win a part of a video game, our brain releases dopamine, thus encouraging us to replay a game. Indeed, our body reacts to dopamine a bit like a drug: it tends to always ask for more, and to develop an addiction. Moreover, video game developers know very well how it works and use this phenomenon when designing gameplay . While some games alternate dopamine crashes and surges, others, like Candy Crush, keep it at constant levels.

This production of dopamine can be maintained thanks to the state of Flow . The latter can be defined in psychology as a mental state reached by a person when he is completely immersed in an activity and is in a maximum state of concentration, full commitment and satisfaction in his accomplishment . Basically, the flow is characterized by the total absorption of a person by his occupation.

Fortunately, humans are tolerant. There is a vague zone of safety in which the activity is neither too complex nor too tiresome, which does not allow anxiety and boredom to set in. Due to the special relationship between challenge and ability, Flow has been used in areas such as sports and tutoring. The famous GRE test is a good example of a design based on the Flow Zone concept. The description of Flow is identical to what players experience when fully immersed in a video game. During this experience, the player loses all sense of time and forgets all external pressures. It is evident that gamers value video games based on whether they can deliver Flow experiences or not.

A medium to reach the youngest in particular

Being present in a video game can sometimes be a relevant way to reach the target of children or adolescents. Recent events provide us with a good example of this. The confinement linked to the COVID-19 crisis has unfortunately had some perverse effects. In fact, child abuse occurs in 80% of cases within the home itself. However, some children confined and mistreated by their violent parents could not confide in a third person. The association L’Enfant Bleu, which has made child abuse its fight, had the ingenious idea of contacting the founders of the Fortnite video game to help them within the game itself. A unique system has thus been put in place to allow young victims to call for help via the famous online game. Fortnite has created a character named EnfantBleu that players can contact after adding him as a friend. They thus come into direct contact with the association that comes to their aid. The character is obviously available 24/7. During confinement, more than 1,200 children contacted the character… Simpler than by telephone to 119, children in front of their consoles were able to easily access this character! This experience could be generalized to other games thanks to a reflection group formed downstream of the operation. 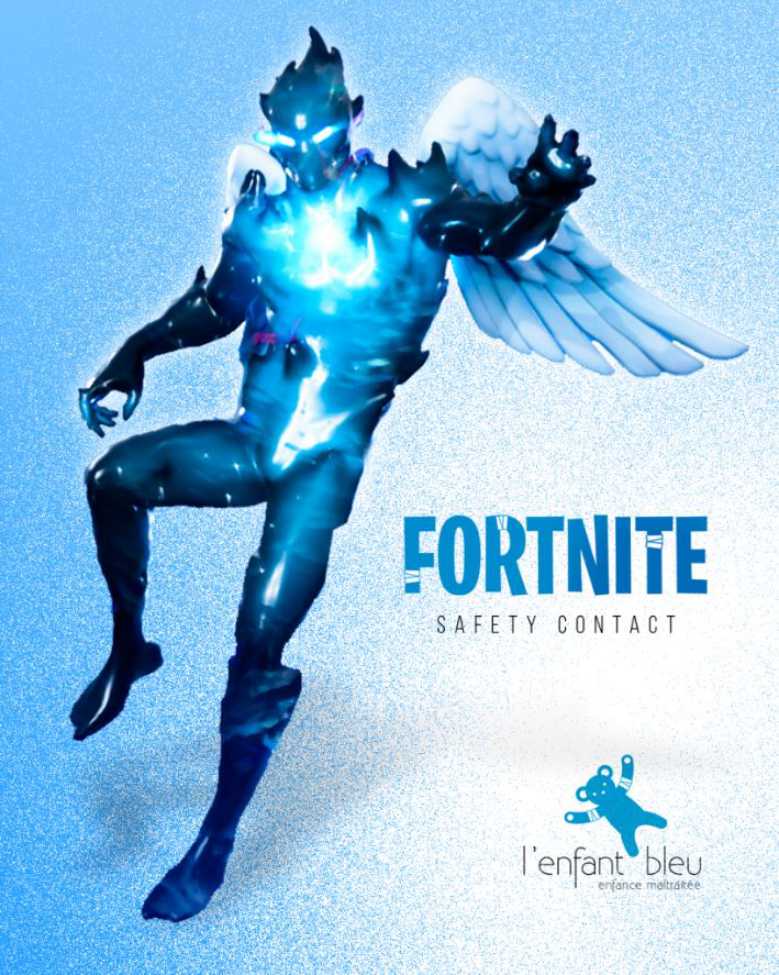